WE THINK: WHEN WILL THE MARKET BOTTOM OUT?

The month of October was no better than September. Though the WIND All China Index dropped only 2.51%, the CSI300 Index fell 6.93%, and the “Maotai Index”, an index by WIND that covers 30 blue-chips of different sectors in China, fell 6.48%. Year to date the CSI300 fell 28%, more than 2018’s 25.3%. The Hang Seng Index fell 13.7% this month, YTD fell 36.48%. “Core assets” were sold off in October for A and H shares, especially in sectors crowded with institutional investors such as electric vehicle and consumers: Gweizhou Maotai dropped 27.37% this month, while BYD have continued its plummet since Warren Buffett’s sell of stake. The sell down was because of: short-term losses from investors, redemption and risk management of funds, and market has shown no mercy to those who fall short of expectation on their 3Q22 earnings announced in October. Afterall, the pessimistic atmosphere continues to loom investor’s appetite.

WHAT HAPPENED TO CONSUMERS SECTOR?

October has seen the most severe sell down of high-end liquor sector in China, with industry leaders, such as Gweizhou Moutai, Luzho Laojiao, Shanxi Fen Jiu all dropping 20%-30% within the month. This sharp fall in stock price has shaken many investors’ belief for the high-end liquor sector, and the drop is not limited to high-end liquor sector only – Haitian Food, also known as “the Moutai in Soya Sauce” in China, has also dropped 26% in 16 trading days, or 58% from its high, evaporating over RMB 410 bn (with only RMB 280bn market cap right now). As the Consumers and Electronic Equipment sectors which are the heaviest holdings by institutional investors dropped the most, such drop has traumatized investors, economically and psychologically.

When Rabbit Fund was asked about our low allocation in high-end liquor exposure, we explained that, despite the fact that Rabbit Fund has always been favoring investments in Consumer sector, since early of 2021 we lowered our positions with high-end liquor and did not invest into Haitian Food due to the reason of overpriced and overcrowded; which also translates to market expectation of the growth of such stock is overly optimistic. One of Rabbit Fund’s research guidelines is to have in-depth knowledge of companies’ mid-to-long term growth, projecting the companies’ future 3-5 years revenue. When comparing such stocks with other of our core-pool holdings in relation to their long-term earnings growth potentials, we found that the growth potential of high-end liquor (and other popular investments at the time) are significantly lower than others names on our list. Thus, it was only rational to lower and switch to others. As no single investor in the market can perfectly predict on the exact timing on when an investments become overheated and bust, nor does anyone in the market would know when exactly the next bullish cycle of a sector would start. But staying away from investing into assets bubbles is always a prudent way of investment management, so does focusing on researching industries and companies before the broader market recognizes their potentials is always one of the best ways to invest in capital markets.

For instance, Haitian Foods current market valuation, after its massive correction, is still around 43x P/E., also indicates how expensive valuations were back in 2020-2021 under the theme of “investing into core assets” in China. Nonetheless, we believe that the market would start to reconsider the importance of the sector in their investment portfolio again after such correction took place in high-end liquor sector.

WHICH STAGE ARE WE AT IN THIS BEAR MARKET?

Till October 20th, the total toll of A-shares buyback actions was 1,510 times in 1,100 different companies, with a consideration of total RMB 158.9 billion, 85.5% YoY growth. The same happened to the Hong Kong stock markets, with 213 companies buying back their shares, with a total amount of RMB 75.36 billion (as compared to RMB 38.07 billion, the full year amount in 2021). Historically speaking, company buybacks often happen most frequently towards the end of a bear market cycle. Such large amounts of buybacks should be treated seriously for long-term investors. 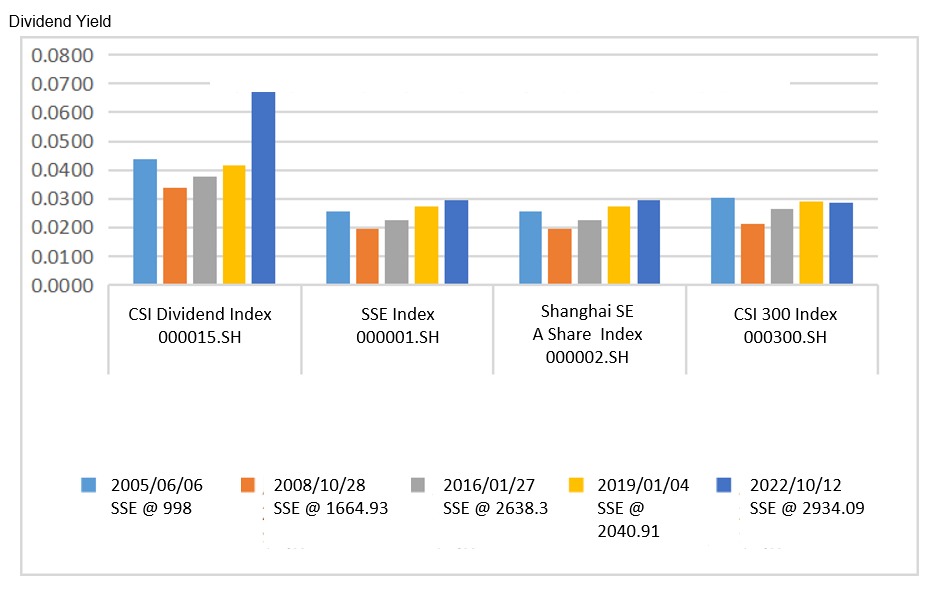 All the above parameters indicate an underpriced valuation of markets, which are commonly seen in an oversold market. While risks and opportunities co-exist, it is up to the investor’s own decision to balance the pros and cons under such difficult times. Personally, I believe that such attractive valuation level is another great opportunity to make immense fortune in the near future, just like any other tough times we have been through in the past 30 years.

No one is a fortune teller and has a crystal ball in the market, but it doesn’t really matter: investors could earn lucrative investment returns by positioning themselves well now and wait for the next (structural) bull market returns and the bear market retreats. Like how we mentioned in previous paragraphs, it also doesn’t matter on when will the bubble burst, because to those who understands well the true philosophy of long-term investments, risk management is always in place to avoid our investments capital vanquishing together with the bubble.

Prediction of market turning points are impractical – variants and changes have always been part of the market mechanism; For example, even with today’s advancement of technology in meteorological science, we still cannot perfectly predict which day is the coldest day and when would spring actually start. But it doesn’t affect the fact that the farmer should know when to start seeding and harvest.

As Mr. Warren Buffett has once said, “be fearful when others are greedy, and greedy when others are fearful”. But not many investors could follow such wise words and I tried to conclude such investors into two categories: investment rookies with less practical experience haven’t understood market cycles, and have yet to develop their own investment beliefs. Such investors are bonded with public opinions, and have difficulties thinking independently. Another type of investor are those who have been through at least one cycle of investment, more experienced when it comes to understand market cycles, but has failed to systematically manage their cash level or positions during a bear market, which causes significant loss of principle. Such investors have liquidity difficulties when valuations are at trough and cannot make significant investments when market is most reasonable to invest into.

SO WHAT SHOULD WE DO NOW?

We won’t be the only one who believes the market are at a cyclical bottom level, but at low levels doesn’t necessarily means to go all-in for our investments – the previous bull market of A-share has been dissected into different phases, and we believe that it would be the same when it comes to bursting the bubble in the market. Many overcrowded companies or sectors are still in the phase of adjusting to their new valuations albeit it’s already corrected stock price. We believe the scenario would more likely be different sectors reaching its corresponding bottom in a different time, just like how they reached their peaks differently. This also explains why some sectors are becoming more and more resilient to market drops, while some of still going through the process of valuation squeeze. In conclusion, from a mid-to-long term point of view, current market valuations are much more attractive as compared with the previous two years. We would suggest to keep updating and expanding your arsenal of investment research, and be prepared by identifying core holdings components right now

WE THINK - 2023 OVERVIEW: Winter has passed; Spring is coming

Much happened in the past year and we will try to conclude the events with the following keywords: geopolitical disputes, inflation & recession, globa

WE THINK：Walking out from the Illness; Market Continues its Rally in the Midst of Doubt

WE THINK: Dollar appreciation leading to another crisis?